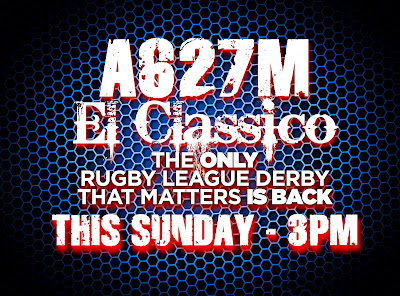 What a difference a week makes.

While Hornets were busy handing Championship Swinton their arse on their home meadow, Oldham’s beating of League 1 Barrow by 22-0 on an equally boggy Craven Park was clearly a sign that the Roughyeds are not only equipped for a serious tilt at Championship glory, thery’re maybe even in with a serious shot at a long-awaited return to Super League!

Well it does if you read the Oldham Evening Chronicle - fudding themselves daft over a perfunctory win against a team now a division below: “With a 22-0 win at Barrow - where they were beaten twice in three games last season - Oldham gave a clear indication that preparations for Championship rugby are well in hand” they squealed.

And the hubris just keeps coming: “Had Roughyeds taken all their chances, Barrow would have been blown away”  - though only in the same sense that if I had tits I’d be my sister.

In reality, it took Oldham 39 minutes to crack the Barrow defence. They then scored three more tries at neat 12 minute intervals in a second half where a clueless Barrow ran out of both steam and ideas. One fancies that Leigh might prove a tougher proposition.

Over at Sedgley Park, Hornets were giving a pretty shoddy looking Swnton a lesson in adventurous play and stern defence - and one would imagine that Alan Kilshaw was somewhat happier with the oucome than his Lions counterpart, regardless of the nature of the game.

With a bit of momentum - and with Oldham clearly pleased with their progress - it all augurs well for the return of the Law Cup. A game which requires no hype whatsoever.

For our previous preview from two weeks ago CLICK HERE
Posted by TLCRF80mins at 13:26