And so the Hornets summer roadshow heads to York. The Knights are a bona-fide, 24 carat bogey team that over the years even good Hornets sides have struggled against. And this season the respective trajectories of both clubs are heading in opposite directions.

On the last five occasions the clubs have met, Hornets haven't come up with a single win - and it includes a challenge Cup defeat when York were in a division lower. The average is a 17-32 defeat benchmark. And, given our recent form, we'd take that. 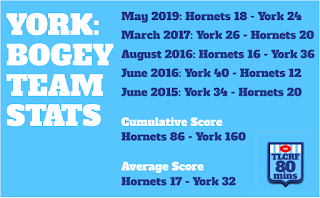 York come into Sunday's game tucked into the Championship's chasing pack behind Toronto and Toulouse. Sitting fifth on points difference behind Leigh and Featherstone, York have been the competition's shock package - 10 wins under their belt already and impressively narrow defeats to both Toronto and, last week, a weakened Toulouse. The French side were missing big hitters Johnathon Ford, Bastien Ader and Rhys Curran - with Mark Kheirallah removed in the 15th minute with a shoulder injury.

York led deep into the game, but a controversial refereeing decision from James Child effectively handed the French side the points.

For a brief period last month, Knights coach James Ford was much fancied for the vacant Hull KR job. But now without that distraction, his eyes are focused on Championship playoff glory, indicating this week that his side are 'not far away' from usurping Toulouse as a serious challenger.

Speaking in the York Press this week he said: "Ultimately we just need to be able to beat Toulouse in a one-off game, don't we." We can confirm that this is eminently possible.

Hornets fans would take beating anyone in a one-off game at the moment. But going into Sunday's contest on the back of a new season-low defeat at Dewsbury, confidence is on the floor.

We appreciate that re-shaping a team mid-season is a tough task, but we seem no closer to a win now than we ever did. All we can hope for are signs of improvement, that the spine of the side gets settled and that everyone within the club - and those outwith - continue to pull in the same direction.

If Dewsbury was the nadir, York is the first step back. See you Sunday.
Posted by TLCRF80mins at 00:06