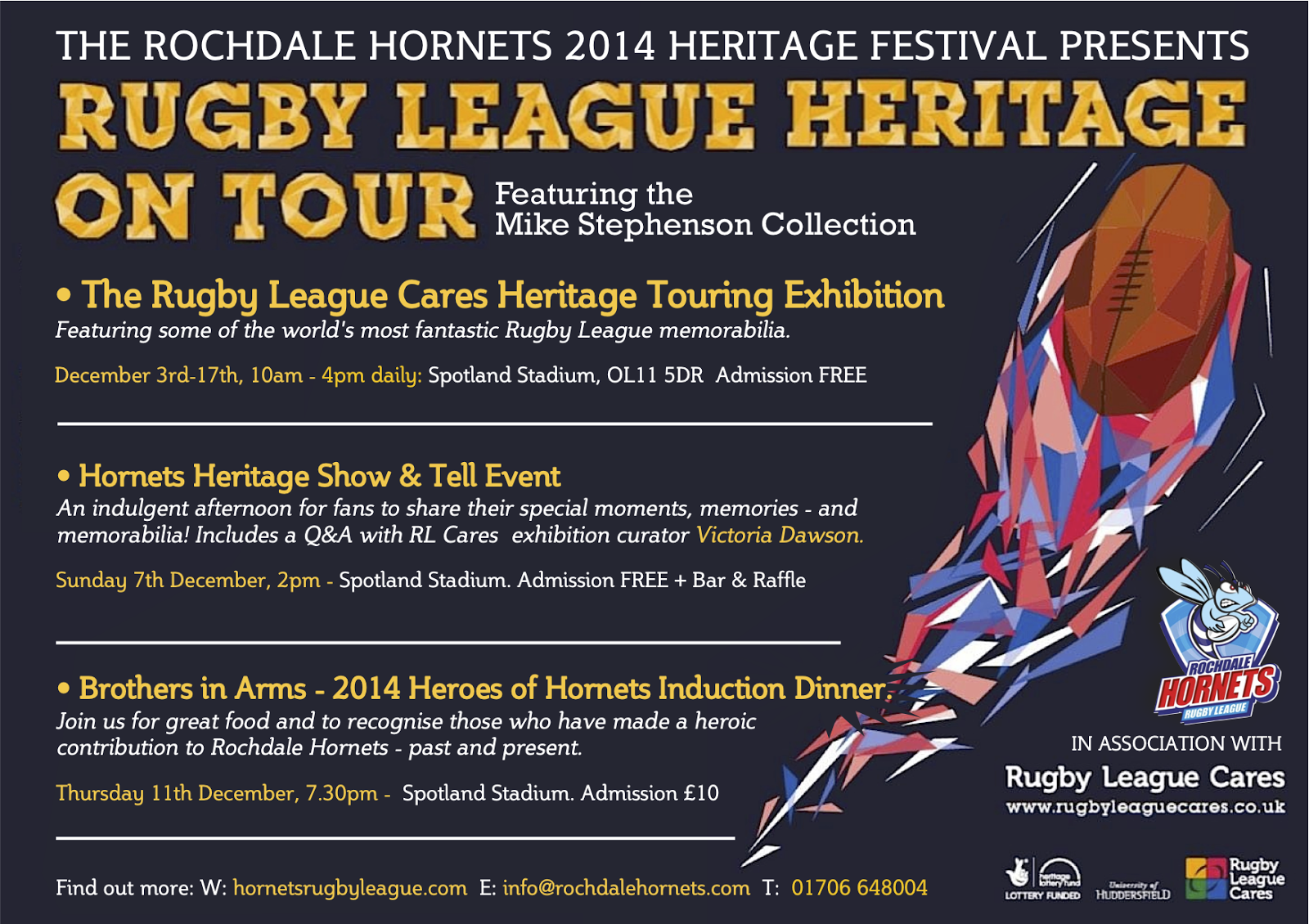 It's often said that those who drink at the well shouldn't forget those who dug it. That's why TLCRF80mins is delighted to support the Hornets Heritage Festival that takes place in December - a fantastic prgramme of events that celebrates our club - and our game's rich history.

At the heart of the festival, Hornets have pulled off a major coup in attracting the Rugby League Cares 'Rugby League Heritage On Tour' Exhibition, which arrives at Spotland on 3rd December and runs until the 17th December. It's open daily from 10 am to 4pm and admission is FREE!

The exhibition tells the story of the game, its players and supporters and, most importantly, the communities that made our sport. In addition to historic memorabilia - including a player's shirt from the first-ever rugby league test match and the ball from the famous Odsal 1954 Challenge Cup final replay - the exhibition tells the story of the game's split from rugby union, the first World Cup, the banning of league in World War Two France and much more.

To tie in with the exhibition's visit, Hornets are running two major heritage events

An indulgent afternoon for fans to share their special moments, memories - and memorabilia! Includes a Q&A with the Rugby League Cares ‘Heritage on Tour’ exhibition curator Victoria Dawson.

We all have one or two pieces of 'Rugby League Treasure' that are important to us.

Whether it's programmes from extraordinary games, favourite Hornets players' shirts, badges from our travels or photographs of memorable days, we all have our own personal little piece of Rugby League History.

Taking part is easy: just bring your favourite piece of Rugby League memorabilia and tell your fellow fans all about it: how you came by it - and why it means so much to you. It'll be a fun, friendly, informal afternoon of shameless indulgence in the things we love most about Rugby League.

And if you have more than one item you'd like to share, bring them all - the more the merrier!

The Rugby League Cares ‘Heritage on Tour’ exhibition will also be open during the afternoon and its curator, Rugby League Historian Victoria Dawson, will also be joining us to answer questions on items from the exhibition and the RL Archive. She will also be launching a new heritage concept for Rochdale that Hornets fans can get involved in.

Join us for great food and to recognise those who have made a heroic contribution to Rochdale Hornets - past and present.

Themed 'Brothers in Arms' to recognise the centenary of the start of the First World War, the second annual Heroes of Hornets induction will pay tribute those who have made a heroic contribution to the club throughout its history.

The Annual Heroes of Hornets presentation - themed this year around Brothers in Arms - recognises individuals past and present who have made a heroic contribution to the club throughout its history. And this year - to commemorate the centenary of the commencement of World War 1, Rochdale Hornets will will proudly honour the players who swapped their club's colours for regimental colours, and who represented their club, their town and their country with distinction.

By 1915, 24 Rochdale Hornets players had joined-up to fight - four of whom made the ultimate sacrifice: Club Captain and England International Walter Roman, Sergeant Twigg, Private T West and Private CJ Burton.  The club will also pay tribute to those at home who kept the spirit of the club alive, holding fundraisers to send footballs to our soldiers in France and continuing - against the odds - to field a team until December 1917.

We will also be inducting some more recent heroes on what promises to be an emotional evening. And, if that's not enough, Rugby League Historian Victoria Dawson will present a showing of rare, recently discovered, 1914 Rorke's Drift Australia & New Zealand Tour footage - where Hornets' own Walter Roman toured with England. We've seen this footage a couple of times now and it's absolutely spellbinding to see how our game looked at this key point in history.

An informal dinner will be followed by presentations to this year's inductees.

Rugby League Cares ‘Heritage on Tour’ exhibition will also be open during the evening.

For more information on events - and to book your tickets for the Heroes of Hornets evening, please contact Ryan at the club on 01706 648004.
Posted by TLCRF80mins at 23:30