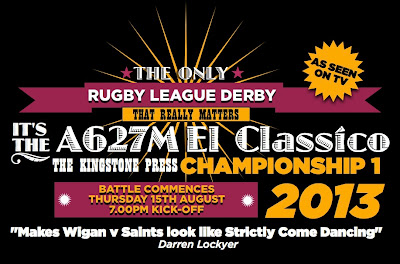 In quite possibly this year's biggest shock since Simon Cowell realised that he's no longer the only bastard in his relationship, Oldham choked spectacularly on Sunday to cough up a 24-all draw with competition whipping boys University of Gloucestershire All Golds.

Leading 18-nil after half-time and by 24-12 with three minutes remaining, it was a formidable capitulation that all but gifted the KP Ch1 title to Big Spending North Wales Crusaders™, who have three games to play, chasing a four-point deficit.

On the face of it, Chairman Chris Hamilton has been surprisingly sanguine. Speaking in the Oldham Chronic this week he said: “If it is going to be the play-offs for us, then so be it. With the coaches and players we have I would definitely be more confident this year than I ever have been."

Hmm, given Oldham's form in previous Grand Finals, we wouldn't be too sure Chris…

But with a trip to Spotland to end their season, Hamilton is putting the enbarrassment of Sunday behind him:  “We’ve got to knuckle down for the Rochdale game on Thursday now. We’re looking forward to that one.”

Captain Lewis Palfrey and Danny Langtree are both likely to return for the A627M El Classico after missing Sunday's draw. Scott Naylor has also added Swinton Fringe utility forward Chris Clarke to bolster his squad for their shot at the playoffs.

Big loss in the Oldham side will be Dual Reg. centre - and the club's top scorer - Jon Ford who will sit out the rest of the season after dislocating an elbow at London Skolars (using Oldham logic, as having a Dual Reg player in their team actually makes them Salford's reserve side, Ford's absence should please the Whitebank faithful).

As everyone is keen to point out, form counts for nothing in these encounters. Quite simply, the team that wants it most will win. It can't come quick enough for us. Bring it on - it'll be a cracker.