Hornets Wrung-Out in a Downpour of Errors

In the toilets at half time - following 40 minutes in which neither team could conjure up the merest whiff of a point - Dave raised his eyebrows in faux exasperation and said, "One for the purists. eh?"

It was hard to disagree as this slippery, error-riddled squelchfest played in persistent rain harked back to days of slugging out ugly games against Cumbrian sides full of king-sized lumps who'd just pound you into submission on attack and defence until you could stand it no more.

Indeed, Workington came with a significant size/weight advantage, so the day's work was going to be difficult enough without Hornets giving them every opportunity to send the heavy-brigade trundling at an over-worked defence.

The visitors went off like a rocket: three back to back sets before Hornets had carried the ball. On their fourth set of punishing drives they conceded a penalty for obstruction, but Jordan Case coughed the ball on the second tackle; inviting Workington to pummel the Hornets defence some more. It was to become a familiar pattern.

Hornes did come up with a rare passage of lucid football on 12 minutes, when a great switch-pass exchange between Ryan Millard and Chris Baines laid the foundation for a repeat set, but the visitors' defence held firm.

On 17 minutes a neat Sean Casey kick through forced Workington into another drop out. The visitors this time smacked the ball a full 70 metres, finding touch on the Hornets 20 metre line as the ball skimmed and skidded past napping defenders. Workington fed the scrum but, unable to find a way through, put on a flapping last-tackle kick that was charged down by Alex Clare. Having regathered, the Town defence bundled him into touch to maintain the pressure. But the Cumbrians couldn't find anything resembling a threat and Hornets took the ball straight downfield where Lewis Sheridan was held-up over the line. By far the first-half's best chance.

With the clock ticking down, the only two moments of any note were Town's Phillips milking the merest touch from Chris Baines after a kick through to win a dubious penalty; then Workington conceding a penalty in possession for punching out.

Having forced a 48th minute drop-out, a Lupton short-ball launched Phillips into space to score wide out. Forber converted. 0-6.

Five minutes later - having seen Wayne English bundled into touch after he fielded a long-kick - Lupton produced an identical pass, this time Phillips the beneficiary. Forber wide with the conversion attempt: 0-10.

With 25 minutes left to play, there was ample time for Hornets to play themselves back into the game, but forced passes and unforced errors early in the tackle count prevented them gaining any real momentum.

In the 76th minute, referee Bloem (who clearly stuggles with the zero tackle rule - four times permitting Workington seven tackles after the set had started in open play on tackle one) gave Hornets the first offside penalty of the day. A last tackle kick into the in-goal saw a scramble of bodies diving in. After consultation with the touch judge, Mr Bloem decided that Wayne Englsih had touched down and pointed to the spot. Crooky added the two and Hornets had four minutes to pull this soggy mess of a game out of the mire.

As it was, Workington were happy to play five-drives-and-a-big-boot, compelling Hornets to start under their own posts. Again, and again, and…

And that was it folks. Almost imperceptibly this game slid past the eyes - the disappointment in the Hornets camp palpable. The bigger disappointment is that Workington did nothing spectacular. They sent in the big-lads, completed their sets and chased big-kicks downfield.

In contrast, Hornets were put through the wringer: forced into way too much defensive work by a litany of errors that simply drained their energy and enthusiasm away. Positives? At least the bonus point didn't go down the pan. 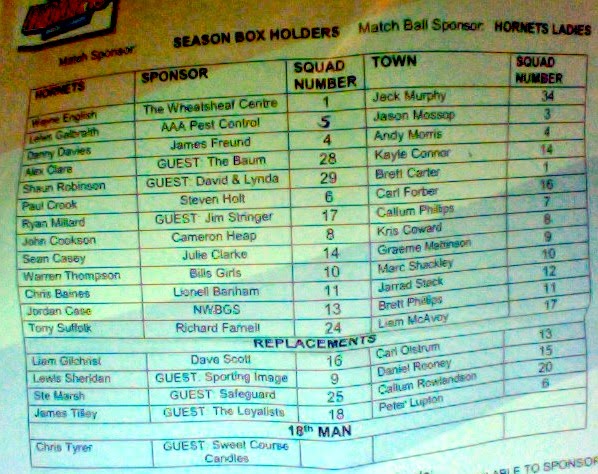