On a bitterly cold night at the misnomered Leigh Sports Village Pavillion (it conjures up images of an English swath nestled in the shadow of a classical Victorian clubhouse when, in reality, it has all the charm of a prison exercise yard), a strong Leigh reserve side featuring the fading Super League talents of Michael Platt and Martin Aspinwall gave Hornets a robust test in this final pre-season hit-out.

Playing a brand of high-tempo, direct football, the Centurions pulled and stretched Hornets around the park for 80 minutes, supplementing their expansive attack with some occasionally vigorous defence, providing an altogether more authentic experience than a half-century blowout against Conference opposition.

And Leigh went at it straight from the gun: James Tilley called upon to pull off a text-book man/ball/touchline tackle to prevent an early break. Hornets responded well with some direct attack of their own: a break by Dale Bloomfield foundering on a misplaced pass; Danny Yates' dink forcing a drop-out. Indeed, when quick hands in the 11th minute slotted Bloomers in by the flag for the first of his four try haul, it felt like an inevitability. Crooky, uncharacteristically, beginning a poor night with the boot, sliding the conversion wide.

Leigh came back with a vengeance and, when the impressive Reynolds launched a lofted kick into the Hornets in-goal Pitman (we think - from 75 metres away through the gloom) took advantage of Hornets' hesitancy to deal with the bobbling ball to score. Reynolds good with the two: 6-4.

Hornets' torpor bled into the restart - a huge Leigh break up the left centre channel saw Reynolds finish the job from 40 metres. He added the goal and the decent Hornets following shook its collective head. 12-4.

Then it was Leigh's turn to wobble, dropping the kick-off. Impressive debutant Danny Bravo went close for Hornets; then Danny Bridge snagged for a double movement as he reached for the line.

Reprieved, Leigh marched straight up the other end where Brad Hargreaves fielded another teasing Reynolds kick, only to get dragged into touch by his own corner-flag. From the resulting scrum fast-hands sent Cox in on the opposite wing. 16-4.

The introduction of Dean Mignacca settled the Hornets ship, his coaxing and chivvying from acting half visibly lifting Hornets' tempo. On the half-hour Hornets hustled the ball left via hand and foot for Dale Bloomfield to grab his second; 16-8.

With the half ebbing away, a big scrambling break took Dean Mignacca deep into Leigh territory. And, as Hornets built pressure, some swift - if scrappy - handling sent Dale Bloomfield in for his hat-trick try on the hooter. Half-time 16-12.

Hornets began the second half in neutral: dropping the kick-off possession and standing off Reynolds as he found Hansen in support to stretch Leigh's lead. Reynolds the two: 22-12.

The game entered a lengthy period of almost tectonic attrition - both packs locked in a physical mid-field battle  that tested tempers as well as defences. On 58 minutes, there was a forensic investigation by the referee as Sam Brooks appeared to accuse a Centurion of biting and - in the aftermath -  James Tilley backed-up well to score from close range. Crooky with his first of the evening: 22-18.

With Hornets looking like the stronger finishers, Leigh sought respite by all means possible: the referee losing patience with a series of persistent offences, and disapatching home prop Spencer with a yellow-card on 74 minutes. Hornets sniffed a chance of redemption.

Quick-hands wide put Bloomers in for his fourth; two minutes later a great interchange of passes created just enough space for Danny Yates to squeeze in. Crooky with the extras and Hornets in front at 22-28 with four minutes to play.

Leigh hadn't quite finished. A well-executed short kick-off saw the home side regather the ball and, when the ball found Reynolds, it seemed obvious that his teasing kick into the in-goal would result in a try. Which it did. We suspect it may have been Foster with the touch-down - again hard to say from our viewpoint through a tangle of limbs. Reynolds capped an excellent evening's work with the conversion. There was just enough time for a last-ditch Danny Yates drop-goal attempt to scud teasingly wide, leaving most spectators retiring to the warmth of the bar feeling that a draw was a fair result.

The question here is: what have we learned? Well, this was a curate's egg of a performance: some good, pacy attack surmounted by Dale Bloomfield's eye for the line; some decent defence in patches and a clear willingness to dig-deep and work hard. On the downside, rolling subs didn't help much - and there's a bit of a lack of 'match sharpness' that will come in the next week or two.

Ultimately, Leigh provided a high-quality prototype for what we can expect over the coming months - and it looks like an intriguing prospect. Let's hope it warms up soon, though... 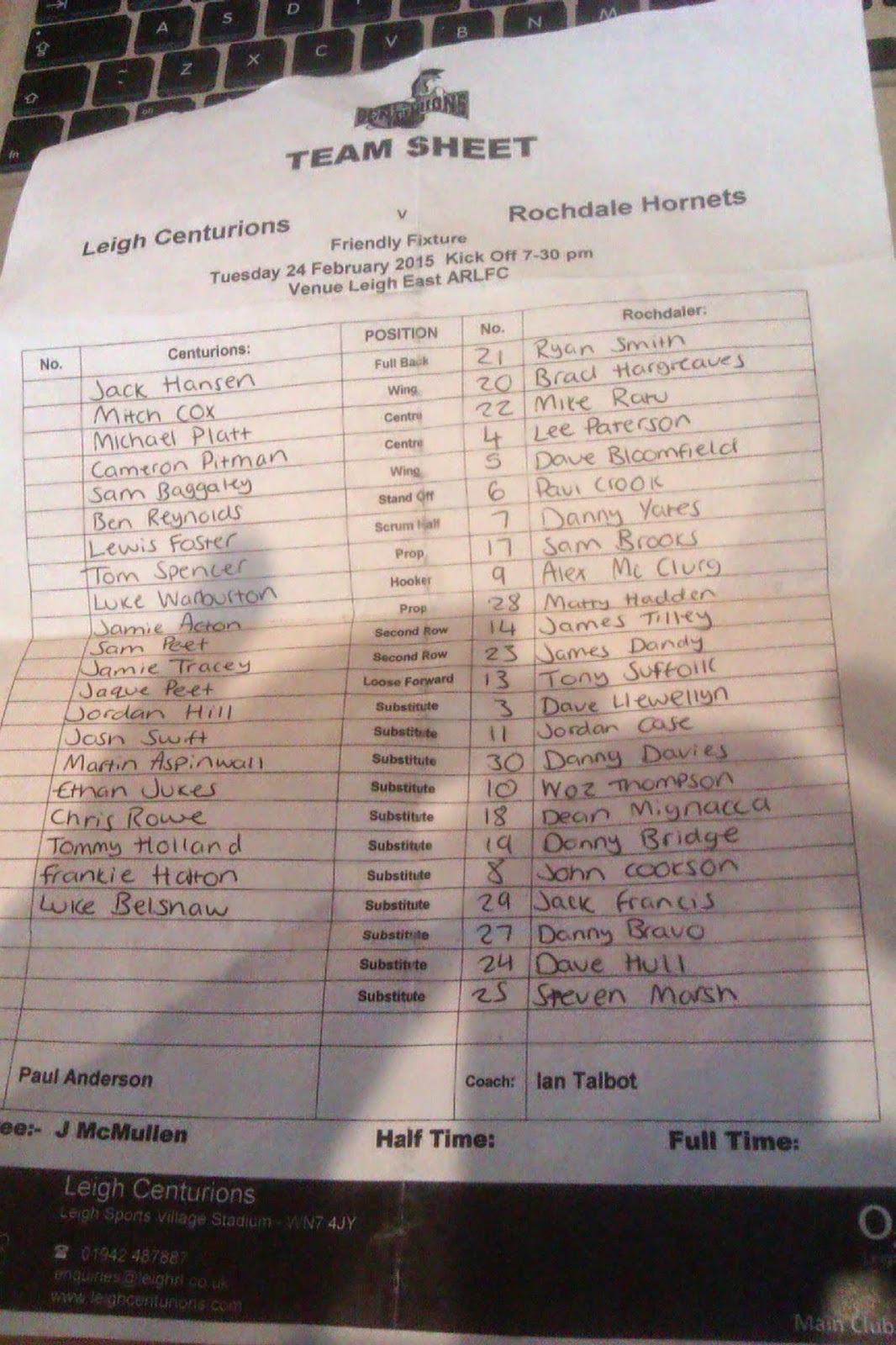