Ah, the allure of the cup - and a welcome to Spotland to Rugby League’s former ‘cup kings’. From 1975, the Chemics appeared in seven of ten Challenge Cup Finals, winning four of those  - and, until recently, people dared to dream that the good times were on their way back to ’Naughton Park’.

Indeed, when the draw was made for this weekend’s Challenge Cup tie, Widnes sat on top of Super League; for one brief, heady moment the best team in the Northern Hemisphere. Having finished last term fourth bottom, all the talk in League circles was whether Widnes could ‘do a Leicester’.

While Leicester City continue to confound and amaze at the top of the Premier League, four weeks - and four consecutive defeats - later, the Vikings have slipped to fifth place, seemingly en route for familiar waters of the division’s lower half.

Seemingly cruising after 20 minutes, Cas upped the ante to score 28 unanswered points that gave the Tigers a 10-point cushion before the Vikings’ Lloyd White grabbed a consolation with eight minutes remaining. Even then there was enough time left for Paul McShane to score direct from a play-the-ball to give the visitors an impressive victory.

In the wash-up, Cas did most of the damage on the edges where both wingers either got sucked in leaving space up the outside, or they failed to handle high kicks to the corners. Other than that, they fell for a couple of close range sucker tries from acting half.

It’d be somewhat contentious to describe Widnes as a one-man team, but our feeling is that if you can stop Kevin Brown, you’ll go a long way to stalling the Vikings’ progress.

Don’t just take our word for it, though.  A Guardian article last month recognises Brown’s disproportionate influence on what happens around him, describing Widnes as having   “… no superstars in this present side, but in their captain, Kevin Brown, Widnes have a player who is at the heart of their success”

Speaking in the same article, Widnes coach, Denis Betts said: “He’s the leader of this group and he’s fantastic for us. I say it every week. He’s never underperformed since he’s been here. He makes decisions on the hoof that only a good player can make.”

Indeed, you’d be hard pressed to find any real media view beyond the fact that Widnes is essentially the Kev Brown show. Even in defeat, he’s the man all eyes are on, the Yorkshire Post singling him out in their report on the Cas game: “Widnes skipper Kevin Brown tormented Tigers full-back Ryan Hampshire in the early stages and kept the pressure on the visitors’ line.”

Again in the Guardian, Aaron Bower wrote: “The Widnes Vikings captain Kevin Brown has been integral to his side’s success this season… Brown arrived at the club at the start of 2013 and since becoming captain, has produced the form of his career, with many believing England honours now await him this year…”  That ‘many’ doesn’t include us, by the way - we believe that Wayne Bennett should be looking to nurture a pair of gun tyros at half back that can take England round for the next decade, rather than a more than capable 31 year old shining in a team with ‘no superstars’.
Indeed, can you even name Brown’s half-back partner at Widnes?

No? It’s Joe Mellor - ex Latchford Albion, Wigan, Harlequins RL half, who joined Widnes in 2013.  He’s just signed a new three-year contract that ties him to the Vikings until the end of 2019 and Denis Betts likes him: "It is fantastic news that Joe has committed the next three years to the club. As a player he is developing year on year.” he said to Sky Sports.

"Joe has been in sensational form so far this year… he is a fantastic bloke and great within the group. He knows the way that we want to play and he has the attitude and energy that will keep enhancing the team." (Translation: ‘he tries hard and runs around a lot’).

The last few weeks have seen a flurry of Widnes players rushing to sign contract extensions - Rhys Hanbury, Stefan Marsh, Chris Dean, Eamon O'Carroll, Joe Mellor, Charly Runicman, Gil Dudson and Patrick Ah Van at latest count. Hanbury said of his deal: “ I always wanted to stay at the Vikings and me and my girlfriend are really happy…” Ah, bless.

Hornets come into the game off the back of a scratchy, but convincing win against an ever improving All Golds. And it is with one eye on the week after’s key game against Toulouse that we consider the context of Sunday’s contest. Yes it’d be nice to bust our backs to have a real dig at Widnes, but it’s a long season ahead and it’d be wise to keep the eyes on the important prize. Given that we’re not going to win the Challenge Cup, at TLCRF80mins we’d be happy with a good showing, a decent crowd and no injuries.

Then we can get back to the serious business. 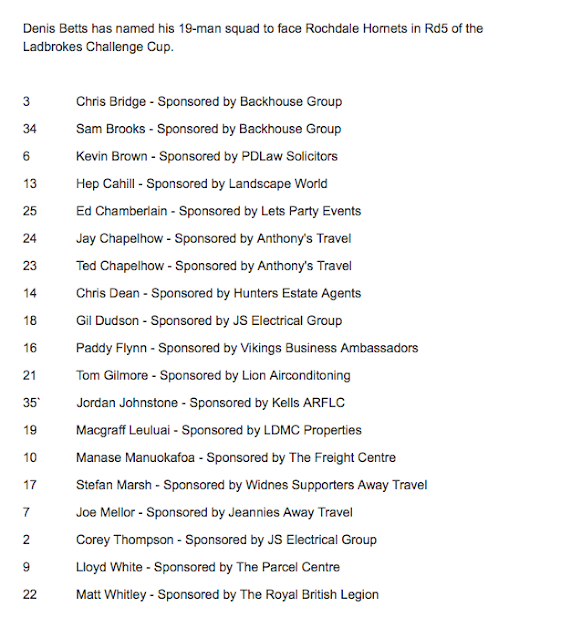