A group of Doncaster fans walked 60 miles to Sundays game. It took them three days.

On arrival at Spotland they saw their team put in a similarly pedestrian performance. Devoid of imagination, inspiration or intent, Doncaster created a black-hole of anti-football where their physio got more game-time than Makali Aizue and where five one-out drives followed by an attempt to inveigle a penalty seemed to be the game plan.

But for a short while, Hornets looked immune to Donny’s creeping stasis, creating all the early pressure. Indeed, on 6 minutes James Tilley took Hornets to within striking range and Ben Moores hit them with a perfect sucker try. Crooky on target and Hornets 6-nil up without really taking off the handbrake.

Two minutes later a great Hornets break: Jo Taira punching a huge hole, Lewis Galbraith supplying the injection of pace and, with Hornets queuing up, what looked for all the world like a Doncaster shout drew the pass away from the support and into the arms of the scrambling defence.

Then, in the space of two minutes, two events which opened up a wormhole through which Doncaster somehow wrestled the momentum Firstly Paul Crook missed touch when he spectacularly sliced a penalty: then the heavens opened with a biblical deluge.

Off the hook and with a slippery ball introducing a lottery element to proceedings, Hornets were caught off guard as Doncaster fashioned a simple try: Scott taking a short ball to score by the posts. Hedges the conversion for six-all.

The game entered a period where the pounding rain hampered any real attempts at fluency, but on the quarter-mark Lewis Galbraith hit a hole in the left channel, only for his inside pass to slip teasingly from Danny Yates’ fingertips.

As the completion rate fell in parallel with the rain, Doncaster conjured up a sneak attack off a freakish bomb; Hornets snagged for a penalty in the aftermath, the visitors kicking dead to ease the pressure.

With both sides struggling to complete, it was Hornets’ turn to produce a moment of oddball peculiarity: Danny Yates’ show & go, the ball worked to Paul Crook; Crooky shaping to kick - launching the ball directly into the side of Woz Thompson’s face from six feet away.

The sloppy stalemate was broken on 35 minutes when - as the only marker - Jono Smith was deemed ‘not square’. Doncaster revealed their ambition, taking the two. 6-8.

Hornets pressed hard in the closing stages of the half: Ryan Maneely held up in-goal, Yatesey forcing a drop out and - in a real moment of timewarp footy - Hornets put on a big push at a Doncaster scrum, only for referee Mr Straw to re-pack the sides in disbelief.

Hornets into the sheds 6-8 down having played pretty much all the football on offer.

If the first half was an error-strewn arm-wrestle, the second was a one-way war-of attrition, where Hornets simply ground-down a Doncaster side that began with an act of gross brutality and then ran out of ideas.

With just two minutes gone Jordan case was lifted, up-turned and dumped on his neck/shoulder. After a lengthy check-up, Mr Straw put the incident on report. Hornets’ response was swift and clinical. A neat narrow-side exchange of passes found Corey Lee with just enough space to score by the flag. Crooky wide by a coat of paint 10-8.

It was now Doncaster’s turn to rack-up the penalties, giving Hornets a platform to build pressure, but when Jake Shoel - a late, late replacement for Dave Cookson who broke down in the arm-up - made a spectacular hash of a real hack & hope kick it put Hornets under needless pressure. But as Donny went wide, the scrambling defence dumped Jones-Bishop into Row E.

Within five minutes Jake Shoel had redeemed his error in some style. A mercurial break up the touchline, a beautifully weighted kick into the space behind the full-back and Danny Yates arriving at speed to gather and score. Lovely stuff. No mistake from Crooky: 16-8.

With Doncaster visibly out of ideas and clearly frustrated, Wright threw a random jab at a perplexed Samir Tahraoui, only for Doncaster to get the penalty. This time it was Tali dumped into touch - just clueless!

As Doncaster flailed, flopped and foundered their way through the last quarter, Hornets continued to try and play through the morass and were rewarded for their persistence on 70 minutes when Ben Julien showed great strength to muscle through and score. Crooky wide with the conversion attempt; Hornets home and hosed at 20-8.

Doncaster saved their best moment of base comedy for last: their short kick off barely clearing the whitewash of the half way line. Hornets marched straight downfield where Danny Yates delivered the coup-de-grace with a piss-taking drop-goal. Beautiful.

As it was, Hornets were deserved winners of this stodgy, disjointed game - and secured second place in Phase one of the season. A remarkable achievement - and given York’s shock defeat at Keighley, it gives us a four point cushion going into the super 8s.

For sure, this was a game that most people will struggle to remember come Wednesday, when the Super 8 fixtures are announced. But it showed that this side can dig in and find a way to win - and Hornets can push on into the Super 8s with heads  - and confidence - high. 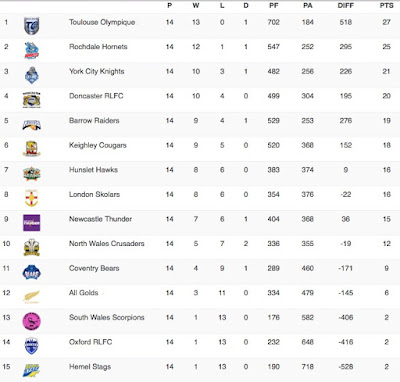