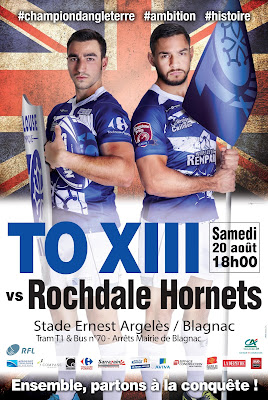 “Together, let us go to the conquest”

There is, of course a huge assumption that TOXIIIC managed to scrape together two brave French hearts in their squad of overseas mercenaries for their poster publicising the game that they’re billing as the ’Final Decider’.

TO XIII vs Rochdale – Saturday, August 20 – For a place in the final?

The leader of League One, the Toulouse Olympique XIII, which hosts this Saturday, August 20 Rochdale at stadium Ernest Argelès, may have the opportunity claim their ticket for  the promotion final to the Championship. Kick-off of the match is 18:00.


A place in the final is the challenge of the meeting between TO and Rochdale.

After this Super 8, the top five of the ranking will play the finals in which 2 places in the Championship will be awarded.

The first promotion final pits the leader of the regular season and the runner-up,  on the field of the highest placed city on the weekend of 17-18 September.

The objective of the team since the beginning of the season, Toulouse Olympique will have the opportunity to secure their place in the top two ranking when they host Rochdale Hornets ( 'Hornets') on Saturday, August 20 (18.00).

Current third-placed, Barrow are currently  6 points adrift with four matches still to play (one less than the TO). But by defeating our nearest rival, the Toulouse team would make a great step towards a final at home. Very good reasons for coming to Blagnac to encourage the Blue and Whites in this showdown!