In his after-match assessment, Alan Kilshaw described this as an ‘incredible performance’. And it was. Rochdale Hornets put down a stunning Championship marker, handing a gutless Dewsbury a lesson in enthusiasm, forward power and slick support play.

Indeed - as we predicted - a frankly awful Rams were impeded by the inclusion of four Wakefield Dual Reg players who looked as if they’d really rather be somewhere else. Keegan Hirst, a big lump with no hint of an offload; David Fifita a rag-handed penalty waiting to happen; Max Jowett, removed with what looked like a broken spirit on the hour mark; and Mason Caton Brown, bombed to a standstill and pinned in his corner by the onrushing twin-juggernaut of Rob Massam and Lewis Galbraith for most of the afternoon.

While the opening exchanges were relatively even, it was obvious that Hornets were the better organised side. Rapid ruck speed, quick play-the-balls, Ben Moores prying and probing - easy metres after the contact in every tackle.

And when Hornets drove close after quarter of an hour, Gaz Middlehurst hit Samir Tahraoui with a short ball five metres out and he slammed through retreating defenders to score. Palfrey the two and Hornets’ Championship tilt up and running at 6-nil.

Hornets fans steeled themselves for a Rams response - which never came. Instead Hornets went back on the offensive and it was Ben Moores weighing in with two contrasting tries out of the top drawer. His first a cheeky mugging from acting half, his second finishing off a sweeping 70 metre move: Lewis Palfrey the break, Danny Yates in support, Mooresey on a searing run to touch down. Quality. Palfrey good with the boot: 18-nil - Hornets fans rubbing unbelieving eyes.

Indeed, Hornets had a flawless 100% completion rate for the first 30 minutes and Dewsbury just couldn’t live with their level of intensity.

On 35 minutes Gaz Middlehurst picked out Matty Hadden, who strode into open field; he launched Danny Yates on an arcing run to the line and Hornets went in at the break 22-nil to the good.

The second half followed much the same pattern. Hornets strong and direct, Dewsbury shipping penalties, backing off tackles, rudderless. On 49 minutes Fijian wrecking ball Jo Taira topped a fearsome performance with the most direct of tries: Danny Yates the short pass, Taira unstoppable from 10m, defenders scrambling to get out of the way. Palfrey the two and Dewsbury’s body language shot.

Dewsbury flickered briefly just past the hour mark, shipping the ball across the face of the Hornets posts, but a needless showboating pass fell into the arms of Chris Riley who hit the gas to take the interception fully 60 metres. From a quick play-the-ball Lewis Galbraith hit Rob Massam with a peach of a pass and he skinned Caton-Brown to score by the flag: 36-nil

But Hornets weren’t quite done. Try number eight captured the contrasts in this contest in microcosm. A dumb Dewsbury penalty, Danny Yates swiftly launching Lewis Galbraith into space, Ryan Maneely in eager support to skate through a soft, shambolic defence. Palfrey on target and Hornets home and hosed at 46-nil.

As announcements of arrival go, this was something very special indeed. A close on perfect performance that showcased how good this Hornets side could be. And, with Bradford taking a whacking at Hull KR, it makes next week’s trip to Odsal a very exciting prospect indeed. Already, the Bulls will need to win eight more games than Hornets to finish above us.

Meantime - at least for this week - Hornets sit top of the Championship. That’s just one place off Super League, folks. Who’d’ve thought it eh? 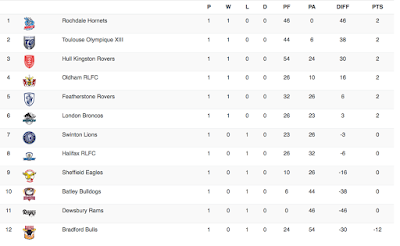