And so it comes to pass. The last fumes of all the expectation burned since February are set to evaporate this weekend.

With Leigh, Toronto, Halifax and Bradford over the horizon, all the talk this week is that the uncatchable Batley Bulldogs present the last realistic opportunity of getting another win this season.

Fantasists, quantum mathematicians and the terminally delusional may cling to the twisted algebra that suggests that Widnes' 12 points his still achievable, but if the Vikings get a win at Sheffield on Friday evening, Hornets are down before a ball has been dropped on Sunday. 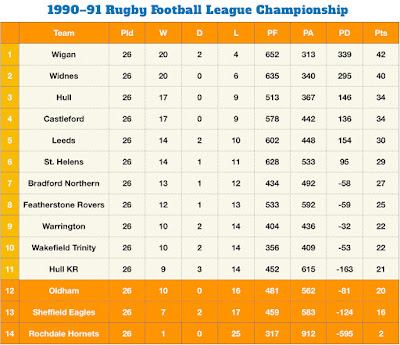 This week has had us looking back to the last time Hornets finished bottom of the table with a solitary win. It was the 1990/91 season in the top flight (then called 'The Championship'), when a 19-12 home win over Bradford Northern was the only highlight of a season that started with succession of narrow defeats and ended in a series of merciless thrashings (Hornets conceded 70 in consecutive weeks at home to Wigan and Castleford).

The metaphor for the season was set in the very first game at Wakefield: Hornets took an early lead through a Mark Viller try, then shipped 40 unanswered points. It was a brutal reality check.

In this season's 27 games, Hornets are on track to concede more points and rack-up a bigger points difference than the 1990/91 side - but there is STILL the opportunity to go one win better.

Batley come into Sunday's game having been dumped out of the Derek Beaumont Empty Wembley Cup™ in last week's semi-final at Sheffield. Batley were kept tryless in an 18-2 defeat. Batley's only points coming from a first half Jouffret penalty at 6-nil.

Matt Diskin blames the defeat, not on poor systems, but on the fact that his side are thick!

“If it’s structures and systems, as a coach you can control that. You can have all the core skill in the world but, if the players drop the ball or throw a loose pass, I can’t control what’s going on between their ears.

“I am not a psychologist, unfortunately and, to be fair, that’s probably what this group needs. It is an individual thing, what is going on between the ears and, at the moment, we are pretty weak in that area.

“I can never fault their effort, but they aren’t the smartest group – they lack game intelligence and concentration.”

Looking ahead Diskin said: “We have got some very important fixtures coming up, the next two weeks are massive for us. If we get two wins there I think we’ll secure our future, but if we show the lack of respect we are doing at the moment for the ball it will be a tough couple of weeks for us." 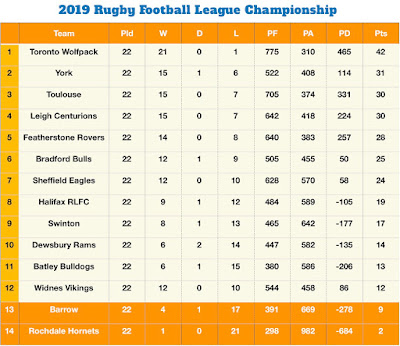 Dewsbury's win at Spotland last week has left Batley looking over their shoulder - having nudged the Bulldogs into 11th place, just four points clear of the relegation zone with five games to play. So a Hornets win on Sunday (and a Vikings win at Sheffield) would leave Diskin's side staring at the trapdoor from 12th.

Hornets come into Sunday's game after a disappointing second half collapse against a pretty ordinary Dewsbury Rams. Having looked good value for their half time lead, Hornets conceded three tries in nine minutes - enough to hand the game to Dewsbury and push Hornets to the brink of Relegation.

As songwriter Simon Aldred said, you can hear "... the unforgiving sound of cold mathematics making its move on me now".

After two years punching above our weight in the Championship, this looks like the week when the weight of the numbers becomes too much to bear.

Would a last hurrah win take the edge off? It'd be nice to find out. See you Sunday.