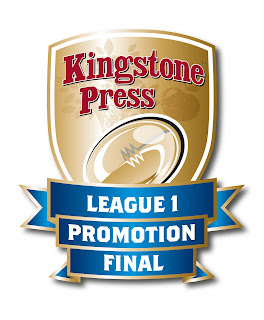 Last month saw the passing of actor Brian Rix - pioneer of the theatrical format known as the ‘Whitehall Farce’: essentially a situation comedy structured around an array of confusions, and which usually ended with Rix’s trousers round his ankles.

But even Rix would have been staggered to see the scale of the farce laid on by the RFL in what we think is one of its less commendable weeks.

Act 1: TOXIIIC are named as League 1 Club of the Year
A risible decision, given that - as a full-time side in a part-time league, with 11 imports - they have treated the third tier with absolute disdain. In pummelling pretty much every side in the division, they’ve done little to boost standards or morale. Indeed, their contribution has been negative - halving the realistic opportunities for promotion and treating League 1 like an irritating speed-bump on their fast-track journey to Super League.

For a club that claims that it isn’t fully professional, the evidence suggests otherwise. Captain Mark Khieralla fessed up in print that ‘only the imports are full-time’ - and photographs taken at Monday morning training show 18 players in attendance. So either the local employers are very understanding - or they were actually at work. You decide.

For us - if we couldn’t choose our own club - we’d have gone for Skolars as club of the year: working hard in the local community, and coach Jermaine Coleman somehow got them into the eight ahead of big-spending Newcastle. But the RFL patently believes that chucking a load of cash at a bunch of mercenaries is an examplar of how to run a club

Act 2: Sylvain Houles is named as League 1 coach of the year.
Again, just ridiculous. Given a huge budget and an opportunity for Houles to work with his team every day, TOXIIIC were already in an advantageous position. Add a salary cap dispensation, fewer visa regulations and at least one player with NRL experience and it’s hardly going to be an arduous coaching task knocking over Scorpions, Hemel and the All Golds.

The one time TOXIIIC were given anything like a fair test this season, they really didn’t like it and Houles couldn’t motivate his pros to beat a group of lads who had to be up for work the morning after.

For us - if we couldn’t choose our own club - we’d have gone for Anthony Murray who’s held North Wales crusaders together this season as the club fell apart around him. Getting them to the Shield final is a genuine achievement. But why would the RFL want to recognise a real achievement?

Act 3: Jonathan Ford is named as League 1 player of the year.
We admit: he’s a great player. He’s played for the Roosters in the NRL and for Newtown in the NSW Cup. So what’s he doing in the third tier of British RL? Taking it easy, that’s what. And, having seen him play at Henson Park, he seems to have come down rather a long way - having developed a rather sad habit of following the referee around begging for penalties.

Fundamentallly he looks bored shitless and plays in five minute bursts when he wants to. It’s taking the piss and it demeans his abilities. And any player not giving 100% isn’t worthy of the player of the year award.

For us - if we couldn’t choose one of our own players - we’d have gone for Barry-John Swindells at Hemel Stags. He’s put in a 14 year shift at Hemel, having played through the summer conference ranks to have a respectable semi-pro career. It’s guys like this that deserve recognition, because it’s guys like this that are the bedrock of League 1.

Epilogue: The League 1 promotion final in Toulouse.
What sort of competition has a final that one set of fans can't get to? It's hardly fair to the travelling side not to share it's big day in front of its supporters. It creates a one-sided event and amplifies the home advantage. We think this is just  another way this comp is contrived to favour a team that has plenty enough advantages.

Finals are rare enough at our level of competition and should be a celebration of the game and of the season, made available for all fans to come and share what is , for League 1 clubs, a huge day out.

But the fans are just collateral damage as the RFL salves the passage for the TOXIIC juggernaut to plough its relentless way up the leagues. Red Hall wants another French team in Super League and nothing will stop it. That a couple of hundred Rochdalians are denied the chance to see their team play for promotion is, to them, an acceptable price to ensure that plan stays on track. Of course the RFL could have made arrangements for Hornets fans to travel to the final; but an atmosphere at a final makes it feel like a contest - and the powers that be couldn’t risk that. As such - much like Brian Rix - it just feels like they've had our pants down.

A longstanding Hornets fan tweeted this week that the best/worst outcome would be for Hornets to win it with no-one there to see it.  But I’d love us to win it regardless - if only to remind the RFL that, once clubs like TOXIIIC have f*cked off to get a kicking by better teams than us, it’s teams like us that will continue to make League 1 a success.
Posted by TLCRF80mins at 00:54